It’s been a while since we’ve had a new invasive pest of wheat, but an aphid, Sipha maydis, has recently been discovered in Hampton County, South Carolina, in a field of rye cover crop that also had some wheat plants in the field. A native of the Old World, previously it had spread in the field to Argentina, Alabama, New Mexico and Colorado. Other greenhouse and produce findings have been made in California, Georgia and Florida. It’s probably a matter of time before we see this insect in North Carolina, if it is not already here.

Wheat and barley are this aphid’s preferred hosts, although it can feed on many weedy grasses, corn and sorghum. It is a particular concern in wheat and barley since it can kill leaves and transmit barley yellow dwarf virus. This aphid is smaller than most of our other aphids, dark colored and pear shaped. 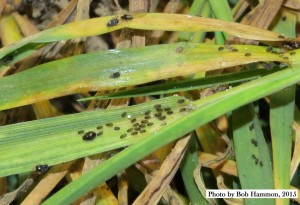