Find this article at:
go.ncsu.edu/readext?528148
— Written By Dominic Reisig

True armyworm has been spotted in northeastern North Carolina wheat over the past two weeks. This infestation is widespread, extending at least from southeastern Virginia to northeastern North Carolina. Given the cold winter, this outbreak likely represents migratory moths that moved in from the south several weeks ago. Accordingly, the infestations are spotty. This is a sporadic outbreak pest, with the last outbreak around 20 years ago, and is not something we worry about as a routine matter. However, given the recent outbreak it would pay to scout. 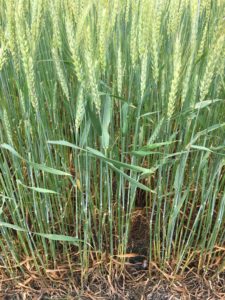 Defoliation of leaves from true armyworm

Larvae are difficult to find and often feed at night. Look for injury on the lower leaves resembling irregular chewing, resulting in defoliation. Bird activity around fields can also be a sign that armyworm larvae are present. Visit several parts of the field and move litter, searching for larvae.

The threshold is six larvae (1/2” or larger) in two square feet. Note that wheat yield losses are highest when feeding occurs during the boot and flowering stages. During milk, potential impacts on yield drop, but can still be significant. For example, if the flag leaf is removed during mid-milk, the potential yield loss is around 10-15%. When the grain is near maturity, double the threshold. 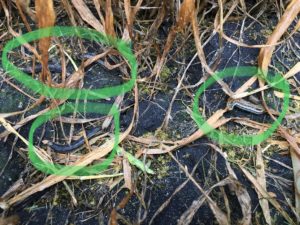 Larvae are cryptic and blend in well with ground litter

Keep in mind that large larvae eat more than small larvae. They consume most material as a larvae during the last few days of their life. Also, when infestations are heavy, they will begin feeding on the awns of bearded varieties, then the grain and can clip heads, especially when most of the foliage is consumed. Be sure that insecticide coverage is adequate. Larvae that are hiding beneath litter will be more difficult to kill. Pyrethroids work well for management, but most have a 30 day pre-harvest interval restriction. Mustang Maxx is one that has only a 14 day pre-harvest interval restriction and can be applied at 2.8 to 4 oz/A for armyworm control. Follow all label instructions.